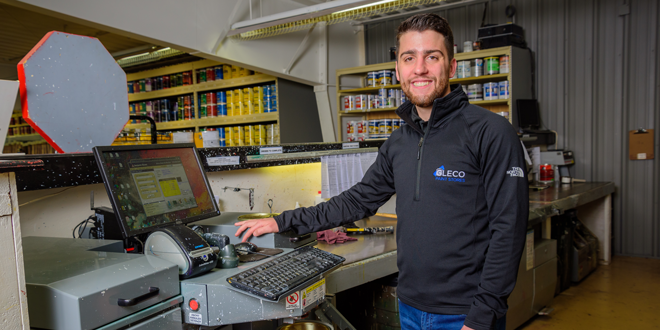 Traditionally, if you wanted to manage your inventory effectively, you relied on efficiencies such as just-in-time delivery, minimal backstock and a reliable sales history. But in one year everything changed. During the pandemic, consumer demand for paint and decorating products accelerated.

The supply chain faced multiple challenges, including reduced work forces, limited availability of raw materials and increased demand. While many independent retailers posted sales gains for 2020, nearly everyone had to rethink the inventory management strategies they had used for so long.

As the industry begins to emerge from the disruptions of the past 18 months, it’s time to think about what happens next. Are there going to be fundamental changes to the way retailers manage their inventory?

That’s a question Paint & Decorating Retailer asked two independent retailers, each with different perspectives and markets. As their answers show, inventory management of the future may focus more on agility in sourcing, tighter assortments and increased emphasis on backstock.

When it comes to sourcing after the pandemic, you’ll need to be agile enough to quickly try new products or utilize secondary suppliers, but you’ll also want to maintain strong ties with your primary vendors. It’s a strategy that will give you the best options when the supply chain gets tight.

Elliot Greenberg, president and CEO of JC Licht, which has 44 paint stores in the greater Chicago area, does most of his business with pro customers. While some activity slowed last year because many professional painters couldn’t work due to shutdowns, sales to retail customers increased. That kept his stores busy while paint products were in high demand.

Greenberg says the first wave of supply chain issues affected mainly sundry distributors. Some of these companies slowed production because they didn’t anticipate the surge in demand among consumers.

He says he was already in a good position to weather a sundry shortage because he was in the habit of utilizing several vendors. Even when other retailers may have been running low, his stores had plenty on the shelves.

“No one walked out of our store because we didn’t have the brush or roller they needed,” he says. “Our diversity of product was the biggest advantage for us. We have two or three lines of every paint sundry, so if we were low in one vendor, there was another. That has always been a strategy of mine, and it paid off during the pandemic.”

When it comes to paint, Greenberg remained loyal to his primary supplier, which worked hard to make sure he continued to receive shipments of the products his customers needed.

“Benjamin Moore did a phenomenal job of filling orders for us,” he says. “They communicated daily with our team, and they were able to get us basic stock, along with some hard-to-find items, and help us keep our prices where we needed to be.”

While agility in sourcing is a good strategy for some areas, he says, the pandemic actually helped solidify his relationship with his core vendor base. His strategy going forward will be to buy as much from the brands that have helped him build his business. The relationships he’s forged over the years of being in business have paid off in vendors doing their best to fill his orders.

“We have shown tremendous loyalty to our vendors over the years; we’re not in the habit of switching all of the time just to serve our own needs,” he says. “As a result, I see all of my vendors supporting me during this time because I’ve been so supportive of them.”

In 2021, the second wave of the supply chain crunch centered on paint. The ice storm in Texas in February, which resulted in the shutdown of some oil refineries and decreased availability of raw materials used to manufacture architectural coatings. Some of those raw materials became difficult, often impossible, to find. As a result, some manufacturers temporarily suspended entire product lines, usually commercial or entry-level products, and focused production on their premium lines, which drew higher margins.

Some manufacturers took another approach; they created new products with formulas that didn’t require the raw materials they couldn’t get.
Mike Gleason Jr., who is part of the operations at Gleco Paint, which has three locations in eastern Pennsylvania, says a willingness to try new products has won him a lot of new business. He had a few trusted customers who would help him vet substitute products before he loaded up his store with it.

“We would have our contractors test the substitute product we found,” he says. “We already had a good relationship with many of the customers, so we could ask them if they would be willing to use it, just so we knew what we were getting into before we made a big order. Some of them actually liked the new product better, so now we’ve found something that works, and we’re offering them better service because they’re getting a better product.”

When he found a substitute product, instead of just ordering a small quantity to see how well it sold, Gleason said he would make a large purchase. While that was a risk he may not have taken in normal times, now he was willing to take the gamble. He may not get another chance to order, and he would be better positioned to pull in new customers. The wisdom of taking risks and trying something new has become even more apparent during the past 18 months.

“For me, it meant being willing to get out of my comfort zone and try something new in order to help my customers solve a problem. Because if you can’t solve it for them, they’re going to go somewhere else.”

Now, Gleason has more inventory in the store than he ever has before, and his aggressive buying tactics are paying off as he picks up new customers.

“Customers are reaching out to us with larger orders and many of them have never shopped with us before,” he says. “They’re often people whose business we’ve been trying to get for years, and now we have a chance with them because we have what they need and their regular supplier doesn’t.”

As manufacturers change their assortments because of raw materials shortages, it’s possible retailers may also make long-term changes to their product mix. Trimming out slow-movers has always been an inventory management best practice; now assortment planners may be a bit more aggressive when purging C and D items. At JC Licht, Greenberg is using the opportunity to reassess his assortments.

For example, if a manufacturer temporarily stopped producing a product line in favor of their higher margin lines, Greenberg was able to move customers to the better product.

As a result, he took the opportunity to consolidate his product offering, which is a trend he may continue in the future. He says his purchasing team will simplify his product mix to focus on his most popular items.

“We may find we don’t need to have a little bit of everything like we did before,” he says. “We intend to start doing more line reviews, eliminating duplication and we may not go with as many C and D items. Our plan is to put more emphasis on best-sellers so if we’re ever in this situation again, we’re in a better place.”

Retailers who used to rely on just-in-time delivery to maintain inventory levels may start keeping more backstock to provide a safety net against supply chain issues. To do that, you’ll need to have the confidence to buy larger quantities, and often buy them further in advance than you may have in the past. Retailers who already have efficient operations and cash on hand to invest in extra inventory may be best prepared to deal with supply challenges.

Sales at JC Licht spiked as contractors got back to work after the shutdown last year. When paint and sundry vendors started showing signs of distress, Greenberg began buying as much product as he could.

Some of his commercial customers place orders for hundreds, sometimes thousands, of gallons of paint. The 60,000-square-foot warehouse at company headquarters typically has space for the truckloads of paint and coatings that come in and out of the facility every day.

When it became apparent there would be limits on how much paint he could get, Greenberg began buying as much as he was able. He didn’t want to rely on just-in-time delivery, in case he couldn’t get what he needed.

“We decided to load up on inventory,” he says. “Business was booming at the time, so we had a little more confidence that we were not going to be stuck with inventory. If we had it, we would be able to sell it.”

Uncertainty over the supply chain also created some positive habits among his staff, which Greenberg hopes will continue into the future.

As business increased, JC Licht’s outside sales reps started learning to be more proactive as they were talking with customers. They asked contractors to let them know how much paint they might need as soon as they got a big job, even if it was months away. Greenberg promised to set aside enough paint for their job, even if that meant storing it for a couple of months.

“We’re learning good sales habits. Our outside sales people are being more proactive at pursuing jobs and planning ahead,” he says. “Stores are working together more to share inventory with stores that need it. They’re learning from each other about what works and what doesn’t to get through this crisis. These are all good habits our people are learning because they have to, but we want those habits to stick.”

Retailers who may not have the large warehouse spaces to bulk up on backstock are getting creative. At Gleco Paint, Gleason cleared as much space as he could in the backroom of each of his stores and has been stacking more inventory on the salesfloor.

He also purchased a shipping container to place behind one of his stores that he uses as extra warehouse space.

He thinks increasing backstock could become a best practice for the future. It’s possible that for some of his key paint movers, he could keep as much as two or three months worth of inventory. He’s going to be wary of depending on frequent deliveries to keep the store stocked.

“We could always make our sundries order last a while, but we’d buy paint expecting a delivery the next day or within a week,” he says. “We never had to worry about it. Now, our entire team is taking the same philosophy with the paint orders as I did with the sundries. We’re stocking more paint than we ever have before. It’s the only way we can confidently service the industry right now.”